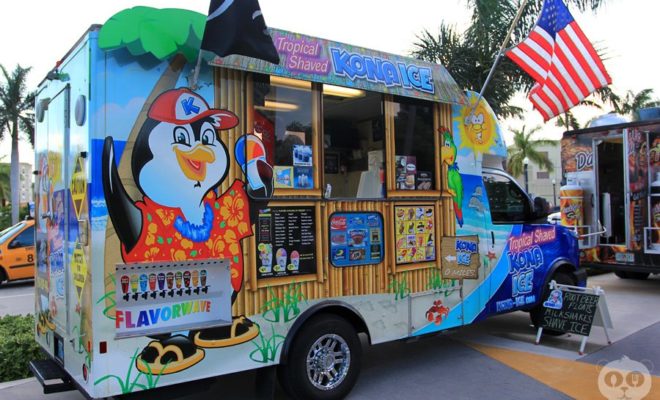 Kona Ice has become a shaved ice truck franchise with many locations in America. With ten different flavors and technology that allows customers to choose how much syrup they want and to mix up flavors, Kona Ice does offer a individualized experience for customers.

This is a flavored ice truck that allows customers to customize their own flavors. However, they are not just in the business of selling frozen treats; they pride themselves on selling an experience, with a delightfully colorful truck and breezy, tropical music to accompany your experience.

This history of shaved ice goes all the way back to Ancient Rome, but Kona Ice started a bit more recently than that. It was established in 2007 Florence, Kentucky by a guy named Tony Lamb. Lamb founded the company in pursuit of building frozen dessert truck of superior quality. One year later, the company already began franchising.

Since then, it has been wildly successful and continues to grow today. In 2012, it initiated the Kona Mini, designed to sell snow cones inside. In 2013, it landed a spot in the Franchise 500 list by Entrepreneur magazine, and was rated one of the quickest growing businesses in America. It was named in a list of the best eight franchise businesses in the U.S. in 2014.

Kona Ice also focuses heavily on giving back to the community. In 2014, the company joined forces with its hometown neighbor Northern Kentucky University and established an internship program, and also donated $2,000 to one of NKU’s business-oriented departments. It also partnered with the Make-A-Wish Foundation a year later, and has donated $25 million to community outreach organizations ever since its humble beginnings in 2007.

It is now found in 43 states with more than 600 locations. Customers can choose which flavors they want with the Flavorware, a patented dispenser of flavor built into the truck. With it they can mix it up with fruity flavors like Wild Watermelon, Lemon Lime-A-Licious, and Strawberry’d Treasure.

This shaved ice truck is a different breed of ice cream trucks. There is a variety of flavors to choose from, and customers can mix however many flavors they would like with the Flavorware. Customers can also request a scoop of vanilla ice cream and condensed milk with their flavored ice. Some customers do complain that the ice is not necessarily shaved, but rather crushed, which can result in a different texture and experience.

One thing that puts Kona Ice above most other ice cream or frozen treat trucks is its nutrition value. Kona Ice carries different varieties, like Klassic, Vita-Blend, Isotonic Performance Blend, and Sugar Free, some of which are infused with vitamins C and D or various B vitamins. Their Klassic flavors also contain up to 60% less sugar than other flavored ice syrups.

Kona Ice often caters to events, whether it be a child’s birthday party or a company gathering. Because it is a mobile business, Kona takes the truck to the event, not the other way around. Not only that, but they also use their Kona Mini to cater to inside events as well.

The Kona Ice Menu Prices are also reasonable. The smallest cup on the Kona Ice Menu Prices is 8 ounces, which is still a sizable amount, for around $2, and the “Kowabunga” size, at a whopping 22 ounces, is only around $5 (and a frozen brain). There are also 12 ounce and 16 ounce options to choose from. Kona Ice delivers a lot of flavor and ice for a small price.