Joe’s Crab Shack is a casual dining seafood restaurant chain. The chain is currently owned by the company Ignite Restaurant Group. The restaurant is known for its delicious American-style seafood. The company has been serving great food and drink to their fun-loving customers since 1991. The chain offers a casual, relaxed, and festive atmosphere. The locations have nautical-themed decor with large seating areas. Many Joe’s Crab Shack restaurants are located on waterfront property to enhance the ambiance and theme behind the restaurant.

Despite its name, crabs are not the only option at the restaurant. The restaurant offers an assortment of seafood such as shrimp, lobster and fish. There also some options for customers who want something other than seafood. The establishment also has a gift shop that sells t-shirts. The restaurant’s t-shirts display advertising slogans such as “Joe’s Crab Shack” and “Got Crabs”. The gift shop provides other items such as shot glasses, towels, caps, and gift cards. The chain is quite a popular brand and has locations throughout the country. The restaurant prides itself in providing customers with great seafood and great times. 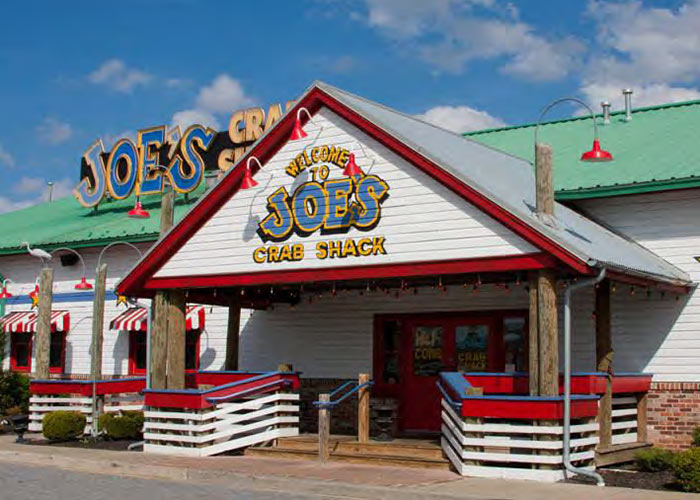 Joe’s Crab Shack is well-known for its great seafood. The first Joe’s Crab Shack was opened in Houston, Texas in 1991 by its original founders. In 1994, this first location was purchased by Landry’s Restaurants, Inc. The chain expanded to three locations by 1995. There were two locations in Houston and one location in Dallas. The company developed the establishment as a low-priced, casual seafood restaurant. This development was successful as sales quickly increased by 30%. The fourth location was opened in Dallas, Texas. The restaurant became increasingly popular because of its affordable prices and fun and relaxed atmosphere.

Joe’s Crab Shack was sold to J.H Whitney & Company on November 17, 2006 for $196 million. J.H. Whitney & Company is a privately held company that operates as JCS Holdings, LLC. In April 2009, JCS Holdings changed their name to Ignite Restaurant Group. This company is headquartered in Houston, Texas. The company focused on getting the restaurant back to its original roots, as a crab shack. It adopted the new brand position of “100% Shore”, which represents Joe’s as a place where guests could visit anytime for an exceptional seafood experience.

The chain has expanded over the years throughout the country. There are currently 130 Joe’s Crab Shacks throughout the United States. There are locations in at least 32 states, which include: Alabama, Arizona, California, Colorado, Delaware, Florida, Georgia, Idaho, Illinois, Indiana, Iowa, Kansas, Kentucky, Louisiana, Maryland, Michigan, Minnesota, Missouri, Nebraska, Nevada, New Jersey, New York, North Carolina, Ohio, Oklahoma, Pennsylvania, South Carolina, Tennessee, Texas, Utah, Virginia, and Washington. Texas has 27 Crab Shacks, which makes it the state with the most locations.

The establishment is very involved in the community and charity partnerships. Joe’s charity partnerships work towards raising money for non-profits and also focus on the health and well-being of children. One example of this partnership is “Autism Speaks”, which is an autism science and advocacy organization that funds research causes, prevention and treatments for autism. Another example is “Share Our Strength’s No Kid Hungry”, which is working toward ending childhood hunger in America. Joe’s has been a charitable giver and a vital contributor towards programs like these. It has also held fundraisers to help raise funds for these causes.

Joe’s Crab Shack consists of a variety of seafood. Appetizers are priced between $3 and $12. Some examples are the Clam Strips, Crab Nachos, Crispy Calamari, Crazy Good Crab Dip, Garlicky Mussels, New England Clam Chowder, and Great Balls of Fire. Steampots are a very popular option and are priced between $23 and $40. Examples of the Steampots include the Artic Bay Steampot, The Ragin Cajun, and Joe’s Classic Steampot. Buckets of Crab is another popular Joe’s Crab Shack Menu Prices choice and is priced between $22 and $30. Selections for the Buckets of Crab include the Jumbo Bairdi Crab, the Snow Crab, King Crab and the Queen Crab.

Joe’s also provides hand breaded fried platters, which are priced between $11 and $14. Examples include the Shrimp and Calamari, the Crispy Catch, the Seaside Platter, the East Coast Platter and the Reel Big Catch. There is also a separate section for shrimp dishes which are priced between $11 and $15, called Shrimp + Lots of It. The Out of Water section caters to guests who prefer something other than seafood. Out of Water selections include ribeye steak, chicken tenders, steak frites, and cheesy chicken. The section is generally priced around $11 and $23. There is a selection of salads, which are $8 to $12. The restaurant also provides a gluten friendly Joe’s Crab Shack Menu Prices.

The standard hours of operation are generally 11:00 a.m. to 12:00 a.m., although the hours vary at some locations. Lunch is served on Mondays through Fridays from 11:00 a.m. to 3:00 p.m. The restaurants are clean and the service is great. The staff is lively, friendly, and attentive. There is usually little or no wait time to be seated. However, weekends tend to be busier so there may be a little wait during those times. Likewise, the meals are served fairly quickly but there may be more of a wait time on weekends when the restaurant is busier. The portions are large and customers love the food. Specials include $2 Tuesdays, which provide $2 drinks and $2 bites every Tuesday and half priced cocktails every Thursday. Joe’s offers a fun friendly atmosphere where guests can enjoy delicious seafood with friends and family.